STANAG-1008 (2004) refers to power plants on NATO naval ships. This is a standard emerging from US MIL-STD-141 (NAVY)–Part 6A1399 under NATO AC/300(NG/3).
Subgroup/4. This standard actually refers to the normal operation of warships and has raised a number of interesting PSQ issues. 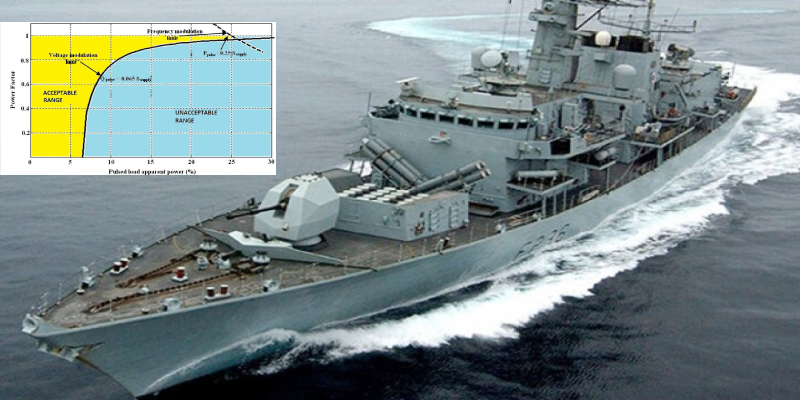 The purpose of this agreement is to ensure operational compatibility between warships of the North Atlantic Treaty Navies and to help simplify issues related to the international procurement of future electrical equipment by identifying mutually acceptable and agreed upon ship electrical power supply system specifications.

Simulation of an energy storage system to compensate for shock loads in the onboard electrical power system.
For the warship electrical power system, pulsed loads (such as radar or sonar) can be particularly embarrassing: when the pulsed load is operating, the generators can always be on transient currents that can stress the prime mover and exciter actuators. Regarding power quality, frequency and voltage modulation issues can arise which can lead to sensitive load misoperations and grid instability. This article discusses the limitations of the pulsed load power level in relation to the supply power.

An attempt to formulate voltage modulation constraints in ship electrical systems with pulsed loads.
One of the most important power supply quality problems in ship electrical networks is 'voltage and frequency modulation'. It results from the operation of certain electrical charges, known as 'pulsed loads', that require high power that are repeated regularly or randomly over short periods of time. As far as engineers know, there is no well-founded theoretical analysis of the phenomenon, although the current restrictions on the operation of shock loads are not properly explained in relation to the standards.